João Gilberto, the Voice of Bossa Nova, Dies at 88 (DownBeat) 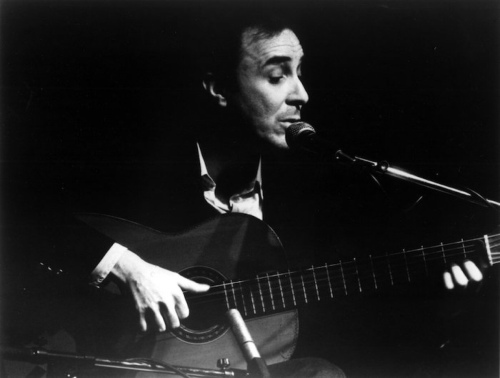 “Look at the wind tearing out the trees’ hair … .”

“But trees don’t have hair, João,” said the psychologist.

“And some people have no poetry in their souls,” he replied.

For my DownBeat obit on the genius João Gilberto, I spoke with Eliane Elias and the legendary Wanda Sá.

Lately I’ve been listening to Egberto Gismonti, one of Brazil’s greatest composers, as I’m working on a piece for DownBeat about a new tribute album to him by virtuoso clarinetist Eddie Daniels. It reminded me of a night in 2014 when I saw Gismonti give a thrilling SRO performance in a church in Paraty, Brazil, as part of the MIMO Festival.  I never got around to posting the article I wrote about that night for DownBeat: here it is.

After the concert, I was invited to go to dinner with him and a group of MIMO staff. He told me about a concert he had given some years earlier attended by his mother and aunt, in which he chose not to play a famous song of his called “Palhaço” (which translates as “Pagliaccio” or “Clown”). As he took his bows, some audience members demanded the song, a fan favorite, repeatedly yelling, “Palhaço, Palhaço!”  His mother and aunt, apparently unfamiliar with the song, took umbrage. Later they told him,  “How can they be so disrespectful! You played so beautifully!” The video below starts slowly, but hang on.

A Night at the Blue Note, Rio with Antonio Adolfo and Bossa Nova legend Carlos Lyra

Although he may look more like a professor or kindly physician, Antonio Adolfo is, in reality, a killer pianist/arranger and master of samba jazz. In early November, the beginning of summer in Brazil, I went to the beautiful new Blue Note in Rio de Janeiro to get my samba fix.  Adolfo led a septet that features some of the finest jazz musicians in Brazil. And then he introduced his guest, one of the great Bossa Nova singer/songwriters, Carlos Lyra. My story in DownBeat.

Last week’s MIMO Festival-Rio was a musical bazaar including MPB (Brazilian pop), Afro-pop, Portuguese pop, jazz, salsa, and unclassifiable music from around the world. And it ended with a samba explosion to make traditional Brazilian music fans smile. Here’s my review in @DownBeatMag.

One of the most acclaimed clarinetists in jazz, Israeli-born Anat Cohen has somehow also managed to become one of the world’s foremost practitioners of Brazilian jazz. If you’d like to expand your appreciation of Brazilian music beyond the usual Bossa Novas, dig this hauntingly beautiful video. Then read my profile of her from the July 2017 DownBeat.

“My first great love was jazz,” Eliane Elias told me recently. “At age 10 and 11, I used to spend hours and hours transcribing my mother’s jazz records; [by contrast,] the samba and bossa nova were just part of the DNA of the culture.” Her new album, Dance of Time, celebrates the 100th anniversary of the first samba recording. DownBeat published a short version of the Q&A in its June issue. Below is a longer one.

Eliane Elias Returns to Sao Paulo and the Samba

Samba is in Eliane Elias’ blood, but it was not the Brazilian singer-pianist’s first love. A piano prodigy in her native São Paulo, she was copping Red Garland licks as a jazz-besotted 12-year-old. Jazz always came first.

It still does. “My first great love was jazz,” she said recently. “At age 10 and 11, I used to spend hours and hours transcribing my mother’s jazz records; [by contrast,] the samba and Bossa Nova were just part of the DNA of the culture.”

For most of her career, including more than two dozen albums, her focus was on her spectacular, straight-ahead jazz piano style. In 2015, however, she returned to Brazil to record for the first time since she emigrated to New York in 1981. The result was 2015’s Grammy-winning Made in Brazil. For her latest album, Dance of Time, which commemorates the 100th anniversary of the first samba recording (“Pelo Telefone”), she once again chose to record in Brazil. The album includes a mix of samba classics (“Copacabana,” “O Pato,” “Sambou, Sambou”), original ballads, and standards.

Do you think of yourself these days as a pianist who happens to sing, or do you give both equal weight?

Eliane Elias: I feel I am a pianist first, although I’ve been singing for a long time, and it’s an integral part of what I do.  But the piano – that’s my instrument. It’s like the continuation of my body, my soul.

How do you balance singing and playing?

Maybe 15 years ago I wasn’t as comfortable doing it as now. But I have gotten to a place where I love singing and playing. In fact, when I’m playing Brazilian things and doing all the syncopation, just the piano alone – with lots of offbeats in the left hand and improvising with the right – already that’s like two people. And then you add the voice, and it’s like, wow, OK!” [laughs].

It does sometimes seem like there are three of you when you’re singing and playing.

[Laughs] I shouldn’t say so, but you’re not too far off.

Why did you decide to record Dance of Time in Brazil?

Is the rhythm section one that you couldn’t duplicate outside of Brazil?

The current album dispenses with the strings you used on your last album. Why?

Traditionally, I haven’t recorded with strings. This time, the harmonies and the tempos were different. As I was writing the arrangements, I felt we had to focus on the samba rhythms of my left hand – they had to be front and center.  There were a few ballads where strings might have been nice, though. On [the ballad] “Little Paradise,” I thought about having Johnny Mandel write the strings. He wanted to work with me, and I was so honored. It didn’t happen, unfortunately, for logistical reasons. But when I recorded the song, there’s a moment that I sing, “A melody comes back to me / that we heard before,” and, at that moment, I quote a melody that was written by Johnny. But let’s not say which one it is – let people figure it out!

The final song on the album, “Not to Cry (Pra Nao Chorar),” a duet with Toquinho, is especially touching.

When Toquinho was in the studio with me, I reminded him that he had started a song back in 1978. I played a little of it, and he said, “Oh my, I forgot!” At the time he had called the song “Eliane,” but it was unfinished. The lyrics [in Portuguese] are all about our story – how he and I used to tour together in the 1970s with [the great Brazilian poet, lyricist and entertainer] Vinicius de Moraes, and how now he looks at photographs of that time and tries not to cry. So we finished it together. The lyrics he wrote are so beautiful they made me cry.

Clara Moreno is the daughter of the Bossa Nova stars Joyce Moreno (universally known in Brazil as just Joyce) and bandleader/composer Nelson Angelo. More to the point, she is a terrific samba singer. Her 7th album, Samba Esquema Novo (De Novo) (translation: “New Style Samba—Again”) on the U.K.’s Far Out Records, re-imagines a seminal 1963 album (Samba Esquema Novo) by the influential singer-songwriter Jorge Ben. He’s the guy who wrote the international hit “Mas Que Nada” (see Clara’s version below). If all this sounds a bit esoteric to you, I guarantee the rhythm will get you where you live. Here’s a “Players” profile I did about Clara from the November 2016 issue of DownBeat.  You can find the album here.