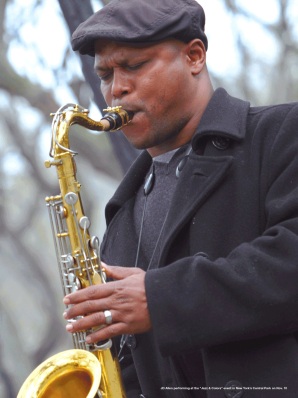 Rising tenor sax star JD Allen almost never plays covers, preferring his own brisk, intense, forward-leaning trio compositions. So, when he was backstage at Jazz at Lincoln Center recently, preparing to make his debut as a guest soloist with the JALC Orchestra in a “Best of Blue Note Records” concert, he wondered to himself, “What the hell am I doing here?” Then he came out and made it abundantly clear that he can play anything.  I interviewed him a few days later in the cafe at the Brooklyn Museum, and the resulting feature is in the February DownBeat.