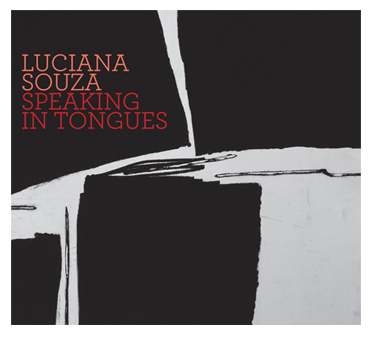 The singer/composer Luciana Souza can penetrate to the heart of a lyric like few other singers, but her new album, Speaking in Tongues, all but dispenses with language. Instead she uses her voice as a solo instrument to front her new international jazz supergroup. My review of the album is in the November 2015 issue of DownBeat in more abbreviated form; here is the full review.

In ten previous albums straddling the worlds of Brazilian music and jazz, singer-composer-arranger Luciana Souza has plumbed the depths of Brazilian popular song (especially in her three critically acclaimed Duos albums); explored the American songbook, most recently in her moody examination of the dark side of Chet Baker; written her own engaging songs; and set the poetry of Pablo Neruda to music. Known for her pure, haunting alto voice and mastery of jazz and Brazilian rhythms, she is also justly celebrated for her ability to penetrate to the heart of a lyric.

In this long-awaited follow-up to the 2012 Duos III and The Book of Chet, however, Souza cuts language loose, in order to launch a cross-cultural musical conversation with an international supergroup consisting of West African jazz guitarist Lionel Loueke, Swiss harmonica virtuoso Gregoire Maret, Italian bassist Massimo Bialcoti, and American drummer Kendrick Scott. The visionary, startling result, a genre-bending conversation among master musicians, sounds like nothing Souza has done before. The album, including tunes both joyful and austere, belongs as much to her colleagues as to her.

In seven of the nine tracks, Souza vocalizes wordlessly over a United Nations of rhythms: there are up-tempo jams over a funky Afro-pop feel, and somber instrumental ballads. The only lyrics she chooses to sing are two poems by songwriter/poet Leonard Cohen (from his collection The Book of Longing), which she has set to exquisite music.

Loueke’s guitar style, combining the folkloric with the funky, was an obvious inspiration to Souza the composer, who wrote six of the tunes; his influence is especially strong in the sprightly Afro-pop/jazz hybrid rhythms of “At The Fair,” “Straw Hat” and “Filhos De Gandhi,” which are replete with the guitarist’s jaunty, finger-picked runs. Maret, who is often compared to harmonica legend Toots Thielmanns, contributes inventive, lyrical chromatic commentary and solos. Drummer Scott exercises meticulous control over complex polyrhythms, with bassist Bialcoti offering sturdy, almost subliminal support. Producer Larry Klein sparingly adds accents of distortion and other electronica that make the tunes occasionally sound as if they are possessed by demons.

“Singing without words means that I can articulate my own humanity with just sounds,” Souza says. She uses this freedom to explore the full range of her creative impulses as a composer. There is an air of exoticism, mystery and exultation in the up-tempo numbers, and an equally strong sense of grief and resignation in the ballads. Taken together, the songs, those with lyrics and without, seem to say, “life is a joy and a gamble, there are no easy answers or soothing bromides to be had; yet our yearnings, sensual and spiritual, remain.” As, Cohen writes in the album’s closer: “No one to follow / and nothing to teach / except that the goal / falls short of the reach.”

Speaking In Tongues: At the Fair; Hymn; Straw Hat; Split; Filhos De Gandhi; A Pebble In Still Water; Free At Last; A.M.; No One To Follow 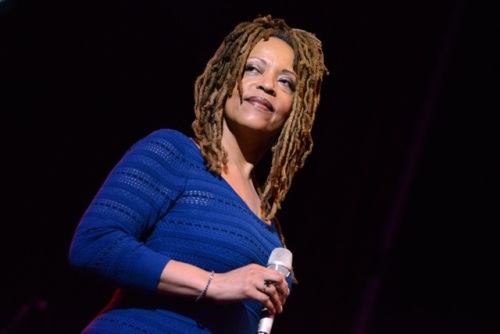 Cassandra Wilson at the Highline Ballroom, NYC on Jan. 13.

Another great night for music — Cassandra Wilson packed them in at the cavernous Highline Ballroom to celebrate the 20th anniversary of her game-changing album, Blue Light ‘Til Dawn.  Here’s my review on DownBeat.com.