“From Bolden to Armstrong” at JALC Gala Concert

It was quite a night: Harry Connick, Jr., Jon Batiste, Catherine Russell, Sullivan Fortner, Wynton, Branford and Jason Marsalis, among others, in “The Birth of Jazz: From Bolden to Armstrong” at the annual Jazz at Lincoln Center gala on April 17. My review for DownBeat.com.

Catherine Russell and her tentet at Jazz at Lincoln Center on Feb. 24, 2014.

…and 50s R&B at Jazz at Lincoln Center. My review from DownBeat.com:

Catherine Russell and a Tentet Tear It Up at Dizzy’s

“I’m shooting high, got my eye on a star in the sky – I’m shooting high,” Catherine Russell sang in her opening number at Dizzy’s Club Coca-Cola on Monday night. With a sold-out house at her feet and the club’s floor-to-ceiling views of the twinkling Manhattan skyline at her back, she seemed to have reached the song’s lofty goal.

Russell, a one-woman reclamation project for classic jazz, blues and R&B from the twenties to the fifties, is all about having a good time, and her mood was infectious. After flourishing for decades as a back-up singer for some of the biggest names in music, including Steely Dan, Paul Simon, David Bowie, and many others, Russell is celebrating the release of her fifth CD since launching her solo career in 2006, Bring It Back. “I didn’t start recording my own albums until I was in my late forties,” she told WBGO’s Rhonda Hamilton in a pre-concert interview, “so it’s never too late!” The concert was webcast live on the Jazz at Lincoln Center website (www.jazz.org).

Her years as a supporting player have paid handsome dividends in confidence and performing chops, now that the spotlight is firmly on her. A versatile singer who evokes Bessie Smith one moment and Ruth Brown, Dinah Washington or Peggy Lee the next, she is capable of purring in a lower register that is as warm as cognac but can also hit clarion, Louis Armstrong-like high notes. What really makes her special, however, is not so much her technical gifts; it’s her innate sense of swing, mastery of phrasing and her actor’s ability to fully inhabit her lyrics.

Russell describes her years at the American Academy of Dramatic Arts as pivotal; “one of the best decisions I ever made,” she says. Studying acting was especially helpful with selecting material. “When I choose songs, I choose them first for the lyrics, because if I can’t tell the story, I can’t really sing the song,” she said.

Vintage jazz and R&B is in Russell’s blood: she was born to jazz royalty and proudly carries on the tradition. Her father, Luis Russell, was a big band leader who served as Armstrong’s musical director from 1935 to 1942, recording many hits for Decca. Her mother, Carline Ray, a Julliard-trained guitarist, bassist, composer and contralto, played guitar with the International Sweethearts of Rhythm and Mary Lou Williams before becoming an in-demand studio bassist.

At Dizzy’s she featured several songs recorded by Armstrong and based on her father’s charts (“I’m Shooting High,” Harold Arlen’s “Public Melody Number One” and “Back O’ Town Blues”), as well as a song written by Mr. Russell for Satchmo but never recorded (“Lucille”). As on the new CD, she combined these swing classics with a potent infusion of hot-blooded blues and R&B from the late forties and fifties.

On “Bring It Back,” a Wynonie Harris track from 1952, Russell sashayed to the languid big band blues, swinging her hips and throwing her body into the lyric, “I love you like you love me/We make a real fine pair/But ain’t nothin’ shakin’ when the dawn starts breakin’/with me over here, and you over there.” In this number, as often during the evening, it was all about the tempo: slower than you might expect, generating a blues feel almost unknown in current popular music, but perhaps ripe for rediscovery (one can hope). Tenor saxophonist Andy Farber and guitarist/musical director Matt Munisteri deepened the groove with solos based in the blues.

Throughout the evening, the big-band arrangements, mostly by Farber, were inventive, swinging and played with panache by an excellent band. “You Got to Swing and Sway,” a dance tune from the thirties by Ida Cox, smartly re-packaged the rhythms of that era. On “I Let a Song Go Out of My Heart,” Farber’s persuasive arrangement of the great Ellington song wittily included an instrumental section that quoted “Once In A While,” another hit of the era, which Armstrong had recorded with Russell’s father. On a stripped-down rendition of Fats Waller’s “You’ve Got Me Under Your Thumb,” Russell was accompanied only by Mark Shane’s exemplary piano, skillfully evoking the stride master, and marvelous comping and soloing by guitarist Munisteri.

Russell’s reading of Al Hibbler’s classic ballad of seduction, “After the Lights Go Down Low,” yielded her biggest ovation of the night as she delivered a pleading, testifying, flat-out sexy performance that seemed to raise the temperature in the room by several degrees.

“A friend of mine turned me on to this Johnny Otis tune,” she said, introducing  the nearly forgotten 1952 Esther Phillips hit “Aged and Mellow.” The friend was her sometime boss, Donald Fagen, who showed up to catch the evening’s second show. The hook, “I like my men like I like my whiskey / aged and mellow” – elicited a big laugh and a round of applause. Played at a leisurely pace, the tune was yet another advertisement for the pleasures of slowing the damn thing down, as well as a showcase for Russell’s dramatic talents.

It might be a pipe-dream to think that we’re due for a revival of this kind of entertaining, soul-satisfying big band singing. The crowd at Dizzy’s certainly seemed to go wild for it. One can always dream. 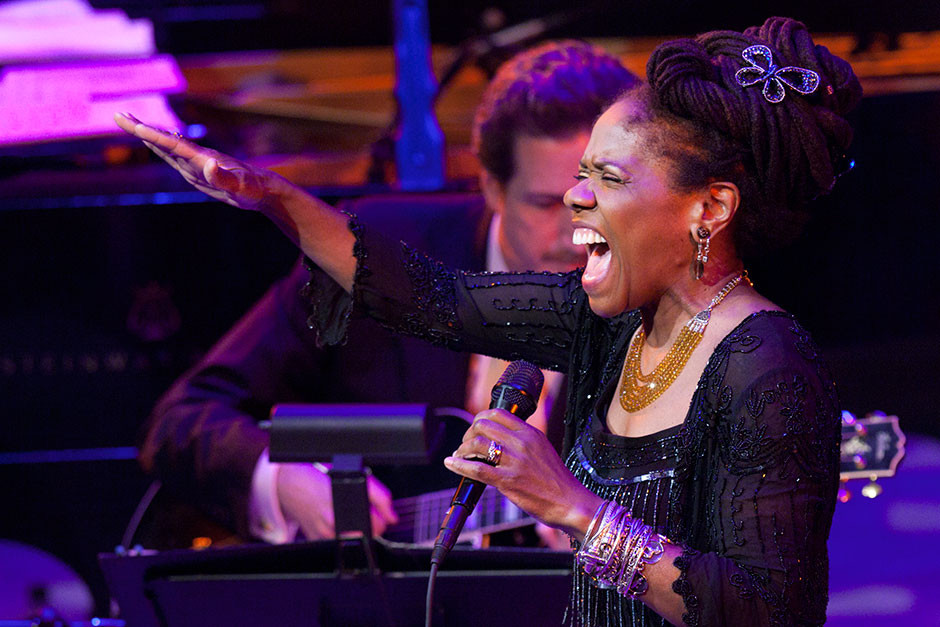