A little over a year ago, Janis Siegel of The Manhattan Transfer arrived home from an aborted tour. “At first we all thought, OK, I’m sure we’ll be back at work by the summer.” When that didn’t happen, Janis and her buddy Lauren Kinhan of New York Voices started figuring out a way to convert their monthly “Vocal Mania” shows at NYC’s Zinc Bar to a live-streaming online format. The result, they told me for DownBeat Magazine, is Vocal Gumbo. My interview with Janis and Lauren. 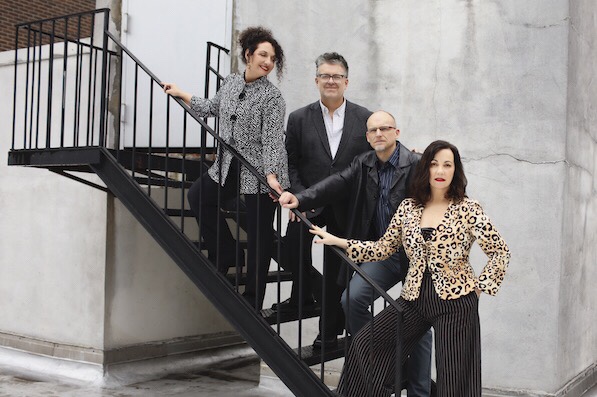 This piece appeared in the November 2019 issue of DownBeat in slightly abbreviated form. (http://downbeat.com/news/detail/new-york-voices-reminisces-in-celebration-of-30th-anniversary). The full version is below.

The title track of The New York Voices’ latest album, Reminiscing in Tempo (Origin Records), was one of Duke Ellington’s first long-form compositions in the 1930s; Mel Tormé added the poignant lyrics in 1962. As they celebrate their 30th anniversary as a recording group, The Voices have plenty about which to reminisce, after decades of international touring and working alongside some of the biggest names in jazz including Bobby McFerrin, Paquito D’Rivera, Ray Brown, Jim Hall and the Count Basie Orchestra.

Founded in the mid-1980s at Ithaca College in upstate New York, they remain one of the world’s foremost jazz vocal groups. Originally a quintet, they became a quartet with the current lineup in 1994: tenor and saxophonist Darmon Meader, the group’s main arranger; baritone Peter Eldridge; and sopranos Lauren Kinhan and Kim Nazarian.

Their longevity is all the more remarkable considering that the four maintain separate careers as artists and jazz educators, and live far apart: Kim in Ohio, Darmon in upstate New York, Lauren on the East End of Long Island, and Peter in New Hampshire.

“We’re really the Eastern Time Zone Voices now,” Meader joked during a recent FaceTime chat with DownBeat. “But that doesn’t quite have a ring to it.”

Nazarian, speaking from her farm near Oberlin University (her husband, trombonist/producer Jay Ashby, teaches there), said, “The key word in our lives is balance, juggling… our personal and professional lives. Even though the Voices is not our primary money maker, it’s our priority job. No one wants to give up the legacy we’ve established as a group. We respect and love each other enough to make it work.”

They all have active careers in music education. Meader is an artist-in-residence at Indiana University; Eldridge teaches full-time at Berklee; Kinhan teaches at New York University; and Nazarian teaches at Ithaca College, often conducting voice lessons over Skype. In addition, the group leads two, week-long vocal jazz camps, at Western Michigan University in Kalamazoo, and at the Bavarian Music Academy in Marktoberdorf, Germany.

The group has become like an extended family over the last 30 years. “There have been more ups than downs,” Nazarian recalled. “We’ve never canceled a show, despite illnesses. Once, in Indonesia, Peter was so ill for a concert that he sat on a stool, and Lauren and I held him up. Also, I delivered my son the day after a concert in Utica, NY.”

Meader’s favorite memories include “the chance to work with people we respect so much, like Count Basie, Ivan [Lins], Paquito. I once had something like an out-of-body experience going over our charts with Ray Brown… And just the other day [at an August all-star Brazilian concert at] the Hollywood Bowl, Quincy Jones came back stage after the show. He asked us, “Who does your arrangements?” And he gave me a fist bump. Moments like that!

“The Voices takes up a smaller percentage of our time than in the past,” Meader said. “But our longevity means we have a big repertoire to choose from. And, when we get together, we’re like dance partners who have worked together for years. There’s a fair amount of practicing in hotel rooms. Sometimes we fly into gig a day early just to have some time together.”

The new album displays the group’s restless eclecticism. Co-produced by Grammy-winning engineer and longtime friend Elliot Scheiner, it includes vocal arrangements of jazz standards by Ellington, Dave Brubeck and Chick Corea; tunes by Fred Hersch (“A Dance For Me”), the Beatles (“In My Life”), Ivan Lins (“Answered Prayers” [É De Deus]), and even two vocal settings of works by Cuban classical composer Ignacio Cervantes. The stunning opening track, “Round, Round, Round (Blue Rondo à la Turk)” is a version of the Brubeck classic with lyrics by Al Jarreau, with additional vocalese lyrics by soprano Kinhan.

“We like to pick more obscure things, or incredibly challenging things, like ‘Blue Rondo,’” Nazarian said. “In 30 years, I think it is one of the hardest things we ever recorded. Memorizing those lyrics is mind-boggling – I don’t how Al Jarreau did it. But, after three decades, we’re still challenging ourselves. We’re not lowering keys, not slowing down tempos, not taking the easy road… We do what we teach. We try to set the bar and be the example of what we ask our students to do.”