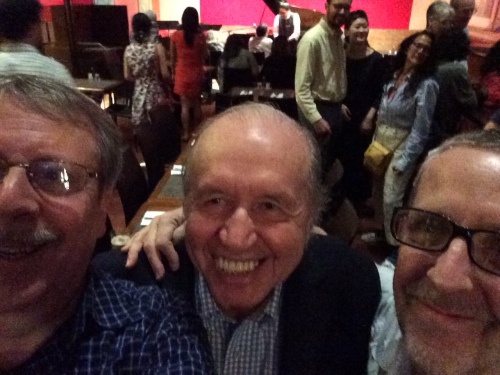 Bob Dorough at Jazz at Kitano, with my friend and fellow Dorough fan Terry King, in August 2012. We were thrilled to meet him.

The great jazz singer, songwriter and pianist Bob Dorough passed away yesterday at 94. Perennially young and energetic, we thought he would go on forever. I saw him give a breezy, masterful performance at Jazz at Kitano four years ago, when he was 90. He sang and played like someone 30 years younger, with his pony tail and that patented Arkansas twang of his that, somehow, added to his hipster image. I interviewed him and reviewed the show for DownBeat. He will no doubt be best remembered for “Schoolhouse Rock,” for which he wrote and recorded many of the songs. But his great songbook also includes the immortal “Devil May Care,” “I’m Hip” (with Dave Frishberg), and “Nothing Like You Has Ever Been Seen Before.” He also holds the distinction of being one of the only vocalists ever to sing on a Miles Davis album (Sorcerer).

In August 2015, I witnessed his first meeting with Cecile McLorin Salvant following her performance at the Newport Jazz Festival. He presented her with a folio of some of his songs that he thought she might like. She was thrilled and subsequently added “Devil May Care” and “Nothing Like You” to her repertoire.